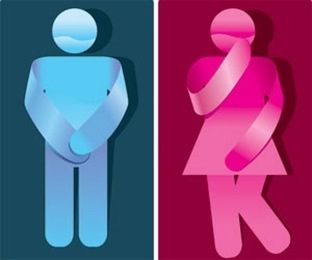 One of my older sons showed me yesterday the video going round YouTube of Russell Brand’s interview with two leaders from Wesboro Baptist Church in the USA. The church leaders express strong anti-gay views and it’s cringey and embarrassing. I would want to distance myself from much of what they say and how they say it. But nevertheless there is some element of truth in what they say – and in what Russell Brand was saying too. Which makes me think that we just need to talk more about sex, especially in the church.

Some think we need to talk less because it’s all we talk about. In fact the media thinks we’re obsessed with it. They think the church only has two issues to discuss: women bishops and gay marriage. Go to most churches and neither subjects are discussed in great length because, important as those things may be, there are other more crucial things to be getting on with. Nevertheless, we do need to be addressing those issues at the local level. And I recognise that we need to be doing that more at The Belfrey. So we will.

When it comes to the issue of sex – be it gay, straight, bi, pre-marital (…and the list could go on) there is much that needs to be talked about. And in the spirit of my blogs where I try to relate as much of my own experience as possible to life and faith, Sam and I have been talking about how much we should share about our own marriage and sex-life. Not that we have it perfect. Of course we don’t. But we keep coming across lots of (literally) screwed-up people both inside and outside of the church who could do with some help and advice and guidance and prayer concerning sexual matters. And we think, as we’ve followed Jesus we have some helpful things to share from our own experience and as we’ve counselled others.

And then there’s the funny side to sex. After all, sex can be very amusing. That’s why there are lots of jokes about it and in the church we need to recognise that and celebrate the good side of that. So something very funny happened to Sam and me in that department yesterday which I nearly blogged about. On reflection though, I think I’ll save it for another day and maybe even another context. Not because I can’t blog about sex, but because Sam and I are still working out what’s appropriate and inappropriate to share. You see, if we say too much, we could end up encouraging a kind of voyeurism in readers that wouldn’t be right. And yet I know we mustn’t be coy and hold back from sharing in a way that’s helpful as there’s a desperate need for 21st Century followers of Jesus to talk openly about sex. After all every one else is. It’s everywhere. And the bible has much to say on the subject. But at The Belfrey, whilst it gets picked up in passing every now and then in a talk, we’ve not had a series on the subject of relationships and sex certainly in the last four years. So we’re going to put that right and later on in 2013 Sam and I are going to have a candid look at this important part of our lives and how as disciples of Jesus we should live as sexual people.

To be fair, I’ve not totally avoided it in my blogging. In fact one of my earliest blogs back in June 2009 was on this subject. That’s why some of those with a highly-filtered search engine had my blog initially barred – because it had words like sex and condom in it. (You’ll all be scrolling down the right hand side for the ‘Search’ button now, in order to find it!) But I’ve not written specifically on the subject since then. But I will more this year. Starting today. And we will talk more about sex in church. Not all the time. But some of the time. And when we do we’ll do so openly, honestly and – I hope – appropriately.

Please pray for us as we do that. Because it will open up all sorts of issues that for some are not straight forward. But it’s a crucial part of life and discipleship. So it must be done.

2 thoughts on “Let’s Talk about Sex”