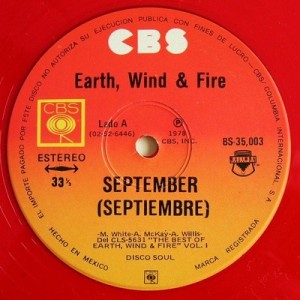 If you’ve never heard September, now is the time to download it and stick it on the car stereo, open the sunroof and enjoy!

It’s hard to work out what the song’s all about. There’s nothing dodgy about the lyrics, it’s just that they are a little vague in meaning and could be interpreted in a number of ways, which is, I expect, how they meant it to be. The song is more about the feel and the vibe than the lyrics. The bottom line is that it’s simply a happy song. A song for September. And that will do for me. Because in September we need a happy song.

We need a happy song to help us transition from summer to autumn, from holiday to work, from the more spontaneous days of July and August to the routine of October and beyond.

Of course in September autumn has not yet arrived. The weather can still be warm and people are still outdoors, snatching the final rays of the summer sun. And yet September has an end of summer, back to school feel about it. And that is good. It’s time to get back to things: alarm clocks, school, work, normality. For many people it’s time to embrace again real, ordinary life. And ordinary is good. Ordinary is the stuff of life. God is in the ordinary and the routine and the mundane.

Virtually the last thing Jesus said to his followers before he left them, was: ‘I am with you always until the end’ which reminds us that the Lord is in the everyday stuff – whether it’s exciting or not.

So God is in the stuff of your life. Wanting to bring fresh perspective. Fresh hope. Even here in the middle in September. And that’s something to be happy about.

One thought on “September”