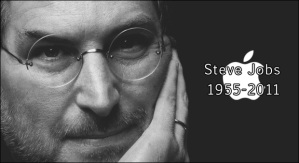 Steve Jobs died last week. When I heard the news, I felt sad. My wife Sam told me that she felt the same. I don’t share his Buddhist faith but I am happy to say that he was a brilliant man: wise in so many ways and thoughtful. I particularly like him because he was a man who tried to change the world.

Watch this short video below about his life.

‘People who are crazy enough to think they can change the world, are the ones who do.’

So, are you one of those crazy people? Has God put something in your heart that wants to see the world around you become different? I suspect he has. If so, how are we going to do it? Well, the Beatitudes are a good place to start. Because they are foundational. They provide the beautiful attitudes that we need to be the change-makers that God call us to be.

So, having already looked at the first four Beatitudes, let’s look at the final four, which look at our relationships with other people. They are found in Matthew 5:7-12:

Blessed are the merciful,

for they will be shown mercy.

Blessed are the pure in heart,

for they will see God.

Blessed are the peacemakers,

for they will be called children of God.

Blessed are those who are persecuted because of righteousness,

for theirs is the kingdom of heaven.

Blessed are you when people insult you, persecute you and falsely say all kinds of evil against you because of me. Rejoice and be glad, because great is your reward in heaven, for in the same way they persecuted the prophets who were before you.

Jesus says that kingdom people are merciful. That means they let people off. They forgive. They don’t bear grudges. They are like that to people who have wronged them, and also to people in need. We were considering this at the 9am or 11am Congregations on Sunday, as we took seriously the call of Jesus to love our enemies. To be kind to those who don’t like us. To positively pray for them, bless them, and give to them. But that is hard. Showing mercy is hard. But we must. If you want to change the world – you must be merciful. Two of the people in the apple video, who particularly did that in the 20th Century were Gandhi and Martin Luther King. They were treated terribly. Abused. Misquoted. Spat upon. And yet they consistently showed mercy. We must do the same.

And Jesus says that if we do that, then we too will be shown mercy. Now this is not about earning God’s mercy, by showing mercy. It’s what is sometimes called ‘a virtuous circle’ – that we do something good because something good has happened to us.  It’s a response rather than a means of twisting God’s arm. So the fact that we forgive is evidence that we have been forgiven. That’s why Jesus said, ‘blessed are the merciful for they shall be shown mercy’.

No6: The Pure in Heart

Jesus says the pure in heart are blessed. Now of course, when anyone comes to Jesus Christ, he cleanses their heart. So in one sense, every believer has a pure heart. That’s not really what Jesus means here. What Jesus means is those with an unmixed, unadulterated, undefiled core. These are not perfect people, but they probably don’t have to come back to God every couple of minutes, seeking forgiveness, because they are living close to God, with pure hearts.

The pure-hearted person lives from good motives and desires that flow from the core of their being like pure clear water. That’s why they are pure-hearted.

Sometimes I come across people like that. Their hearts are especially pure. It’s probably not that they’ve been closeted from the world. It’s just that somehow the mess and pollution of the world has not stained them as much as some. Their hearts have remained pure. There’s a kind of good innocence about them, but not in an overly-childish way, but in a good, lovely, wholesome way. Have you ever met someone like that?

When I was a boy of about 10 there was a TV series on the BBC called ‘Your Life in their Hands’ about people who put themselves in the hands of doctors and surgeons. And my dad appeared in one of the episodes as the surgeon undertaking a difficult spinal procedure. The operation, thankfully, went well, and my dad, as usual, prayed before he did the surgery – to the interest of the TV crew and commentator. As a result a number of people came to my dad asking him to operate on them and one was a rich Christian businessman fromDevon. His surgery went well and he told everyone he met that they should get their surgery done by my dad. This included a quiet Roman Catholic nun who he came across from the convent in his Devon village. Her name was Sister Adeline.

She was part of the evangelical sisters of Mary, who’d been influenced by Corrie Ten Boom, David Watson, and the renewal movement of the 1960s and 70s. So Sister Adeline came up from Devon to Yorkshire, to be operated on by my dad. And we got to know here as a family and she was the most lovely, gentle, pure-hearted woman you could ever meet. There was something about her serenity, her demeanour and her smile that was lovely. And I later discovered, when I met her again in my late teens,  that she had prayed for me and my brothers every day for those ten years. She is someone I would describe as ‘pure in heart’.

Jesus says these people ‘will see God’ – which means God will especially reveal himself to people like this. And I’ve seen that on many occasions with pure-hearted people, like Sister Adeline. I know that they have a very close, intimate relationship with God. They ‘see’ him, like perhaps others don’t. Which is why I sometimes go to those kind of people for prayer. Because not only do they long to bless you, but they often hear very clearly from the Lord. Because they have a close relationship with him. Because they are pure-hearted.

Jesus says the peacemakers are blessed. Being a peacemaker is not about just wanting a quiet life! It’s not about pushing conflict under the carpet and hoping it goes away because as we know conflict tends to crawl out from under the carpet, and rear again it’s ugly head! No, being a peace-maker is about gently but firmly confronting aggression and aggressors, and working with them to find another way. That is risky, because you can easily be misunderstood, or advantage can be taken of you, and you can even lose your life. Just like Jesus Christ, the ultimate peacemaker, lost his life whilst making peace for us, with God. But for the sake of the bigger picture… for the sake of God’s plan… for the sake of the Kingdom of God, we would want to say that it was worth it.

As far as we know, since the year 3,600BC the world has known peace for only 292 years. During this period, there’ve been around 15,000 wars in which 3.7 billion people have died. The value of property destroyed by war is equal to a gold belt around the world 100 miles wide and 33 feet thick.

War is expensive, painful, sad and destructive. Jesus encourages a different way: for his followers to be peacemakers. And we need peacemakers internationally, regionally and locally. Peacemakers, says Jesus are ‘God’s children’. They bear the family likeness. Just like Jesus himself – the Son of God – the Prince of Peace.

Let’s be honest, we all want to be liked. It’s a nice thought to be popular. But Jesus never guaranteed popularity. And often Christians and churches that have made the biggest impact have found that in the process they are abused, ridiculed and persecuted terribly. If you want to change the world, you have to be prepared for that.

We don’t go seeking persecution. We’re not here to stir up trouble. But as the kingdom of light meets the kingdom of darkness, issues sometimes arise that mean we get persecuted. It’s interesting that Jesus puts this Beatitude straight after ‘the peacemakers’ to remind us that our role, like Jesus’ is to bring peace, not to stir trouble.  But if we stand up for righteousness – for right relationships – for God’s agenda for humanity – we will get abuse for doing so. We might even get injured and martyred, as Martin Luther King discovered. In fact if we are simply faithful as followers of Jesus, Jesus says that we’ll get ‘insulted & persecuted’ and that people will speak falsely and in an evil way against us.

If today is an average day in the church, then do you know how many followers of Jesus will be martyred today? The answer is about 400. So the persecution and martyrdom that Jesus tells us will happen is happening – right now. That is the reality of the world we live in. But the good news is that the kingdom of heaven belongs to the persecuted people of God. They have a rich reward in heaven. So we can rejoice when persecution happens, because not only is it what happened to Jesus but also to a great line of people and prophets before him (and since) who have stood up for God’s kingdom. And even in the midst of their persecution and, for some, their martyrdom, God was with them and powerfully used them. And he will do the same with us.

So, do you want to be used by God to change the world? If so, then according to Jesus you need to become a person who’s poor in spirit; who mourns; who’s meek; who hungers & thirsts for righteousness; who’s merciful; who’s pure in heart; who’s a peacemaker and who’s persecuted. Being kingdom of God people is about living like that!

One thought on “Beatitudes 3: Steve Jobs & Changing the World”