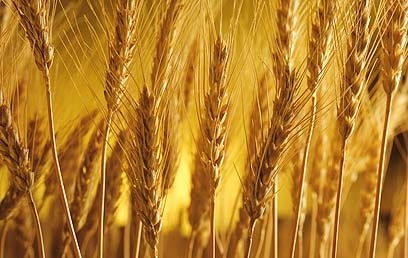 Yesterday was Harvest Assembly at Hempland Primary School – the fantastic school that Isaac and David – my two youngest boys – attend. My wife Sam went and said it was really good. I wasn’t there but as I awoke this morning and sat down to pray and open the Scriptures, my attention was caught by a piece of paper nearby headed The Harvest Song. It was the lyrics to one of the songs the boys had sung yesterday which they’d brought home. So I started to read the words and I recognised that I’d heard it before and I began to hear the song in my head. I was imagining the children singing it in the assembly. And as I did that, the Spirit of God came on me and began to fill me a fresh wave of his love. It was beautiful. Interestingly, the headache that I’d woken with began to dissipate.

All this was happening as I was reading the words of the song, which speaks very simply of the hardworking job of gathering the harvest. And how we give thanks ‘to the One who brings sunshine and rain.’ On one level that’s what the song is about. Being thankful for the harvest of crops.

But there’s a secondary meaning to this song, which picks up the words of Jesus in Matthew 9:37 – where he talks of a harvest of people whom God desires to bring in to his kingdom. Like the grain harvest it’s a harvest that involves hard-work and is rewarding and good. It’s also a harvest where we give thanks ‘to the One who brings sunshine and rain.’

As I read the words and in my head heard the song being sung, the Holy Spirit was stirring me and reminding me of these two different harvests. Both important. Both good.

One further thought came to me. This time of year is known as the season of ‘harvest’ as we celebrate the bringing in of the crops. This is ‘harvest-time’. But in terms of souls for the kingdom of God, this is also ‘harvest-time’. Right now. That’s what Jesus said in Matthew 9:37 – ‘the harvest is plentiful’ – which is why he went on to say:‘ask the Lord of the harvest to send our workers into his harvest field.’

So that’s what I’ve been praying for this morning. For more workers in the harvest field. Will you join with me in praying for that, especially here in the North of England? And how about you being part of the answer to that prayer too? Can you work in the harvest harvest-field of God’s kingdom today?

So, here’s the song. Enjoy.

1 There is a farmer who stands in his fields,
and he sees all the work to be done.
He has been watching for many a month,
He’s been waiting for this day to come.

There’s a song to sing as the harvest comes in,
To the One who gives sunshine and rain.
Let us all join in with a thank-offering
For the harvest that’s gathered again.

2 There was a time when the fields were prepared,
And the good soil was carefully ploughed.
Then came the day for the farmer to sow
And the seeds were all scattered around.

3 There was some time for the farmer to wait
As the seeds slowly grew out of sight.
Then came the day when the first shoots appeared,
And the farmer was filled with delight.

4 Now is the time when the crops are full grown,
And the farmer must gather them in.
He’ll need some help ’cause there’s lots to be done,
And it’s hard to know where to begin.

One thought on “It’s Harvest Time”