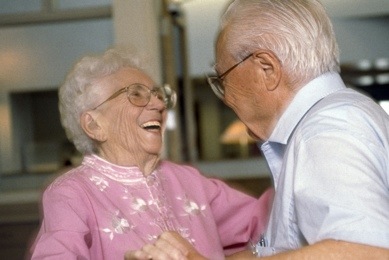 Here’s a great story I read yesterday from John Ortberg’s The Me I Want to Be:

My niece Courtney got married not long ago, and at the wedding reception they had a dance for married couples in which they would eliminate couples from the dance floor based on the length of their marriages. At the beginning we were all on the floor. Courtney and Patrick were the first to leave, then all the couples married less than one year left, then those married less that five years, and so on. Nancy and I made it to the 25 year cut, and by that time the crowd had thinned out considerably.

Finally, there was only one couple left on the dance floor, and they had been married 53 years. everyone watched them – a tall, courtly, silver-haired man who stood a foot taller than his wife – but they watched only each other. What a contrast between the newlyweds, fresh in the health and beauty of their marriage, and the beauty of another kind of love that shone from the last couple on the floor! Perhaps part of why we appreciate such beauty is that it speaks to us of an inner flourishing not visible to the eye.

When the dancing ended, the master of ceremonies turned to Courtney and Patrick and said to them, ‘Take a good look at that couple on the dance floor. Your task now is to live and love in such a way that 53 years from now that’s you. That dance is your dance. Now it begins.’

2 thoughts on “The Dance of Marriage”