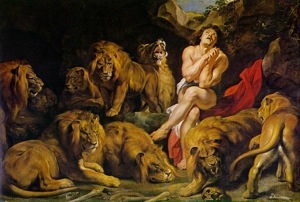 I was asked to speak yesterday at Manor School – one of York’s leading secondary schools – on ‘Daniel’. I didn’t assume people knew which Daniel I was talking about so we began by looking at various famous Daniels. So we considered Daniel Craig – the much-admired contemporary James Bond. Then Daniel Radcliffe – the actor known to so many as Harry Potter. Then Daniel Sturridge – the young striker making his mark at Liverpool Football Club. But in the end we settled on a different Daniel: the Daniel in the bible who has a book named after him. His name, like all the other Daniels means ‘God is my judge’.

The name Daniel is more popular in some places than others. So it’s not popular in France at the moment, coming in very low down the pecking order as the 223rd most popular name to call a new baby boy. In the UK it’s fairly common, now being the 11th most chosen name. But go to Spain, it’s presently the number one name for a male child! My eldest brother – whose name is Daniel – will be pleased!

The Daniel of the bible was a real person, living approximately 2,500 years ago. He was an exceptional leader who worked hard, was disciplined and had a good job serving king and country. He didn’t live in Israel (where most of bible is set) but in Babylon at a time when God’s people had been captured and many taken to Babylon (modern Iraq/Iran) to live. Other leaders in Babylon were jealous of Daniel. They wanted to find a way to get rid of him and realised the best way was to do something relating to his faith, as Daniel was a man of prayer, who trusted God. So the bad leaders tricked King Darius into signing a bad law, which said that if anyone prays to anyone other than the King for next 30 days, they would be thrown to the lions! Daniel continued to quietly and unobtrusively pray to God three times a day. The other leaders told the king, who reluctantly had to abide by his own law and throw Daniel to the lions. Daniel stayed in the lions’ den all night. Amazingly next morning Daniel walked out of the den alive and well, unharmed by the lions!

That’s basically the story which over the years has become well known. Much great art has been produced telling the story, including the piece above produced in the early 17th Century by the Flemish artist Reubens.

In the story, Daniel explains that God preserved him by sending an angel to close the lions’ mouths. God looked after him in the lions’ den!

The end of the story is sometimes sanitised for the sake of supposedly tender young minds – but I thought I’d give them the whole thing yesterday – so I told them how it finished. The King was so cross with the leaders who’d conspired against Daniel that he decided to give them the same punishment they’d wished on Daniel. They were thrown into the lions’ den … and were immediately eaten alive by the lions!

So there it is. A story that’s been an inspiration for many people for two and a half thousand years. But why have so many people found this a helpful story? The simple answer I think is this: Daniel is an example of someone who did the right thing (by continuing to pray) and yet found himself in a lions’ den. And most of us know that can happen to us. Doing the right thing doesn’t mean life always goes easy. In fact, sometimes it’s the opposite: we can do the right thing and feel like we’re surrounded by lions.

The missionary John Paton knew something of this. Here’s his story that’s been confirmed to be accurate by three different sources. Early last century, Paton and his family went to Vanuatu to tell the local people about Jesus. They didn’t go to force the message but to share and to help. Some locals didn’t want to know and surrounded his mission headquarters one night, intent on burning them out and killing them. John Paton and his wife prayed all during that terror-filled night that God would deliver them from what felt like a lions’ den. When daylight came they were amazed to see that, unaccountably, the attackers had left. They thanked God for delivering them.

A year later, the chief of the tribe was converted to Jesus Christ, and Mr Paton, remembering what had happened, asked the chief what had kept him and his men from burning down the house and killing them. The chief replied in surprise, ‘Who were all those men you had with you there?’ The missionary answered, ‘There were no men there; just my wife and I.’ The chief argued that they had seen many men standing guard – hundreds of big men in shining garments with drawn swords in their hands. They seemed to circle the mission station so that the natives were afraid to attack. Only then did Mr. Paton realise that God had sent His angels to protect them. The chief agreed that there was no other explanation.

That story sounds rather like the story of Daniel. God sent angels to protect against what felt like a den of lions.

The politician William Wilberforce knew this to be true too. He came from Hull and was Member of Parliament for Yorkshire. He lived at a time when slavery was still allowed in Britain and beyond. Wilberforce became a Christian and dedicated his life to ending the slave trade. He tried and tried, year after year, but failed to get enough MPs on his side. Sometimes when he got up to speak, people mocked him and verbally attacked him and humiliated him. It felt to him like he was in the lions’ den. But he believed God had called him to do this great thing. So he kept going. He did the right thing, but it wasn’t easy. God protected him and preserved him until eventually, in 1807 the Slave Trade Act was passed and Wilberforce’s life work had been worth it!

These three stories – of Daniel, John Paton and William Wilberforce – remind us that doing good things doesn’t mean life is easy. Sometimes it can feel like going into the lion’s den.

Have you found that? I have sometimes. I love my work as a church leader and appreciate my role as a bible teacher. I want to help people see how the message of the Scriptures speaks to real life. It’s a privilege to teach and blog and communicate in that way. But at times it’s difficult, especially if I say some things that I know some won’t like. Of course I try to always do that kindly, politely and graciously, but nevertheless it sometimes feels like going into the lions’ den.

Maybe you feel like you’re in the lions’ den today. If that’s you, hang in there. Trust in God. Ask for his help. And you may be surprised at what happens. You may well find that, like Daniel, you are not eaten alive! You may well discover that God honours your bravery for standing up for what’s right.

You never know, like Daniel people might even be talking about you, hundreds or even thousands of years after your death, as someone who was willing to go into the lion’s den for the sake of doing what’s right.

2 thoughts on “Into the Lions’ Den”