Last Monday was Halloween when the world celebrates darkness. I talked with the Belfrey staff that morning about light. Here’s the gist of what I said.

I wrote in last week’s Friday Message to the people of The Belfrey about an experience that happened to me recently. I was walking down Petergate in York, approaching St Michael le Belfrey Church and the Minster Piazza, just after it had stopped raining. The pavements were wet. But the clouds had cleared and the sun had now come out, shining in all its glory, magnified by the wet stone which was acting like a mirror. As a result the light was exceedingly strong and powerful. Warm and beautiful. It was wonderful to behold. I went on in that Friday Message to talk about people in the bible, like John and Daniel, who experienced Christ as light. In receiving him, we receive light. A light to pass on.

One way we do this is by shining.

At the top of this blog is a picture. A picture of two people – standing in the light. It’s a photo taken by my son, Luke, of me (in the yellow jacket) and my friend Andy (to my right) in the Lake District last April. You can find this picture on unsplash, the free online site for uploading and downloading pictures. There’s something about this picture that’s caught people’s imagination, so much so that it now has 4.8 million views.

In the summer the Pokemon Go Reddit site used it as the banner for their site – as can be seen here:

As the post above shows, there’s even been enquiries on the site about my jacket (and I’ve been personally contacted about it too!) Amazing! The picture is still being used on the site today – a site with millions and millions of views.

I’ve never met Kris Vallotton, who has a strong prophetic ministry and is based at Bethel Church, Redding California. But I’ve heard him speak on a number of occasions and read some of his books. Last weekend he posted on social media a quote from one of his books, with a picture. Here it is: 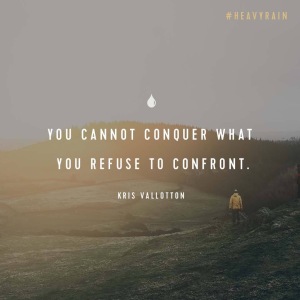 And there it is again! That same unsplash picture of me in my yellow jacket!

There’s something about this picture. And I think it’s something to do with light. Particularly because both Pokemon Go and Kris Vallotton have used the left-hand section of it – the bit with me standing in the light. I find this fascinating.

It reminds me of Isaiah. Isaiah says: ‘A people walking in darkness have seen a great light’ (Isaiah 9:2). But he goes on to say: ‘Arise! Shine! For your light has come. And the glory of the Lord rises upon you’ (Isaiah 60:1).

There God’s people are told not just to see the light, but to shine the light. The idea is that God’s light so impacts us that we radiate, reflect and give out his light.

This is very much a New Testament idea which we see, for example, in 2 Corinthians 3:17-18. There disciples of Jesus are told that

‘we all, who with unveiled faces, reflect the Lord’s glory are being transformed into his image with ever-increasing glory, which comes from the Lord, who is the Spirit.’

The background to these words is Moses. He spent time in God’s presence on Mount Sinai and came down with a bright face, reflecting the glorious light of God, so much so that he wore a veil. But now we, as New Testament people, have a much greater revelation of God and more glorious gospel than the Israelites. We too are impacted by the Lord’s presence and are called not to veil or shield his light, but rather to shine it.

There’s an unusual Greek word used for this is 2 Corinthians 3 – only found once in the bible. It’s the word katoptrizomenoi and it literally means ‘beholding as in a mirror’. Some English bibles translate it with the word ‘contemplate’ but that misses the missional context of the passage. The idea is not that we see Christ’s light for our own contemplation but that we reflect to others. That we look like the Lord. Because the Lord Jesus is radiant. Full of light. Beaming. And glorious.

The call is to shine.

How do we do this? There are a number of ways, some of which are unpacked in more detail in the next chapter of 2 Corinthians – eg. by preaching Christ and pointing to him (2 Cor 4:1-5); by keeping going when it’s hard (2 Cor 4:7-17); and by keeping our eyes on the unseen (2 Cor 4:18). But most importantly we shine when we face Jesus Christ. We shine as we fix our eyes on him. If we look face-to-face on him, we’ll reflect him. If we turn away from him, fixing our eyes on our circumstances, we’ll reflect our circumstances. Which might be great, but might not be. The call for disciples is to stay focussed on Christ. That’s who and how we shine.

So stay close to Christ. Face him. Spend time in his presence. Be prayerful. Walk in His Spirit. And encounter him. As we do this and worship him, we’re told in Isaiah 60 that his glory will rest on us. Isaiah says that in the midst of deep darkness, we’re to arise. Stand up. Get up. Get on. And shine his glory. And the more we do that, the more glorious he will become. And so will we. Because our shining attracts his glory.

Last week I was away with the family on the east coast and one morning I saw the sun rise over the sea. I watched as the sky began to change colour. It was beautiful and stirring. A few mins before the sun came up, I saw an elderly man walking down a side road towards the sea front. He was walking with his dog and aided by a walking stick. As he got to the road at the front he just stopped. And he took in what he saw – this glorious sky and the sun about to burst forth from under the horizon. He must have stood there for four or five minutes. Leaning on top of his stick. I watched the sky, and watched him. I was imagining what he was thinking about as he took in the light. And I thought of the description of Jacob in Hebrews 11:21 – of him worshipping whilst leaning on top of his walking stick.

All this reminded me that Jesus Christ is glorious. Resplendent. As he says in John 8:12, he really is ‘the light of the world’. But Jesus also said to his followers (in Matthew 5:14), ‘you are the light of the world‘. Really? Me? Us? Isn’t that heresy? Isn’t that putting ourselves in the place of Jesus? No. Because the light we have, is his. Our job is to arise and shine his light. It comes from Christ. It belongs to him. We reflect him. As in a mirror.

So shine. Today. This week. Shining the light of Jesus.

‘Arise, shine, for your light has come,

and the glory of the Lord rises upon you.

See, darkness covers the earth, and thick darkness the peoples,