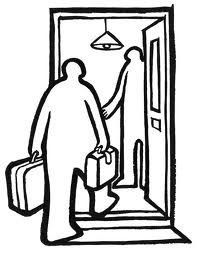 Today my son Joel is coming home after nearly a month away in Borneo. The school leaders he’s been with all took mobile phones for emergencies, so Joel chose not to take his. He was concerned he might lose or damage it. So there’s been no calls, texts or emails. We’ve been assuming that no news is good news.

A month is a long time to be away from home, especially when you’re still at school. But it’s also been a long time for Sam and me. Joel is the second of our five sons and the family hasn’t been the same without him. We have missed him. I have missed him.

I will have many questions to ask him. What was it like? What were the highs and the lows? What were the people like? And the food? How was the travelling? Did you stay well? Did you make new friends? Will you go back again one day?

I will also be interested to know what he discovered of God in Borneo. Because the bible is full of stories of people who met with God whilst away from home – and I know that happens to many today. So did the Lord speak to him? And show him things? And teach him things? That’s what we’ve been praying for him both before and during the time away.

If you have the opportunity, it’s good to travel – especially when you’re young. It’s a great privilege to be able to go away. But it’s also good to come back. To return to familiar people, places and surroundings. It’s good to come home.

‘Coming home’ is a picture Jesus used for conversion – of returning to God after time away. God, says Jesus in the Parable of the Two Sons (Luke 11:15-32), is like a loving father, waiting for his precious son to come home. If you missed my blog on this back in May, you can read it again at: http://zwp.me/pqwBd-fs

So today Joel returns. I feel rather like the waiting father. I will be excited to see him. To hug him and welcome him. Because today my son is coming home.