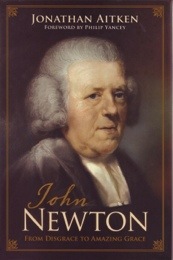 I’m really enjoying reading Jonathan Aitken’s biography of John Newton that I picked up in the United States. Philip Yancey writes a helpful Foreword relating Newton’s experience of grace to the life of the disciple. Here are a few quotes from that Foreword.

Grace, like water, always flows downward, to the lowest place. I know no one who embodies this principle better than John Newton, author of the best-loved hymn of all time. Against all odds “Amazing Grace” written some 230 years ago, still endures.

Newton faced opposition, sneers and second-guessing during his lifetime. Some scorned his evangelical enthusiasm, some charged him with worsening rather than helping the travails of his friend William Cowper, and some scoffed at his abolitionist crusade as an attempt to assuage the guilt of his past. Newton did not try to defend himself but pointed to any good in himself as an outworking of God’s grace. In doing so, he stands squarely in the biblical tradition, for it’s great heroes include a murderer and adulterer (King David), a traitor (the apostle Peter), and a persecutor of Christians (the apostle Paul). Grace always has about it the scent of scandal.

Jonathan Aitken … served John Major as Chief Secretary to the Treasury. In a steep and sudden fall, he was accused of criminal behaviour, fought the accusations fiercely, then admitted to perjury, and was sentenced to eighteen months in prison. Unable to cover the costs of his trial, he declared bankruptcy. A divorce soon followed. We have a strange phrase in English, “fall from grace”, a phrase often applied to Aiken at the time. Actually it was a fall into grace for, like John Newton, Aitken found in abysmal depths the first steps towards redemption.

Like Newton, Aitken does not defend his past but rather falls back on the amazing grace that saved a wretch like him. The existence of this book is a testament to the possibility of a new start, of redemption that uses and transforms the past without erasing it. For grace, like water, always flows downward, to the lowest place.

I thoroughly recommend not just Yancey’s Foreword, but the biography itself, wonderfully written by Jonathan Aitken. It’s a great story of a transformed life and how God calls fallible, frail, fallen people to follow Jesus and make a difference in the world.

One thought on “Grace & Discipleship”