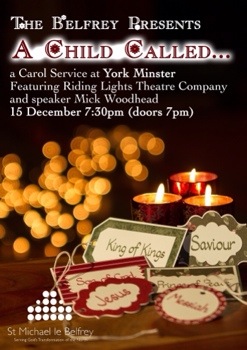 Lots of inviting goes on at this time of year, and rightly so. It’s a season to share with others. People invite family to all sorts of meals, concerts, nativities and plays. Friends are invited to a party, for a drink or some kind of festive occasion. Work colleagues are invited to a function or some kind of social ‘do’. We invited The Belfrey clergy for a Christmas meal last night and had a lovely evening hanging out together and being thankful for each other. We’ve invited our neighbours in next week to get to know each other better and celebrate the season.

There was lots of inviting going on during the first Advent. Mary was invited to be the mother of Jesus. She was also invited into the house of her cousin, Elizabeth. When Joseph was considering divorcing Mary, the Lord appeared to him in a dream, inviting him to change his mind. The shepherds were invited by the angels to go and visit the baby Jesus. God used the Advent star to invite the Magi to follow and seek the new-born king. And then there was the ‘wrong kind’ of inviting too – as the Magi were invited by cruel King Herod to report back after they found the new baby king. Fortunately God warned them in a dream not to go back to Herod. There was definitely lots of inviting going on!

People like invitations. It shouts that they’re included. It tells them they’re wanted. It announces that they too can be part of the celebration. Which is why people need to be invited to come and discover how amazing Jesus is.

Invitations don’t force people to come. Invitations simply say what’s going on and that they’re welcome! The choice is theirs. That’s important. A forced invitation isn’t an invitation. It’s a demand.

Followers of Jesus are called to invite people to meet with Jesus. And there’s no better time to do that then during the Advent season. There are so many opportunities to join in the fun and festivities, especially to well-put-on Christmas events and carol concerts. That’s why some of us have been out on the streets inviting folk to The Belfrey’s massive Christmas extravaganza in York Minster this Sunday evening. Not only will we there be fantastic singing lead by a great choir, but we have freshly written material from Riding Lights Theatre Company, some inspiring videos and stories, and Mick Woodhead from St Thomas Crookes in Sheffield will speak and remind us what it’s all about. It’s the kind of event that we’re excited to invite people to!

In every community, there are all sorts of Christmas things people can be invited to at this time of year. Big events and small. Planned and unplanned gatherings. The important thing is that invitations are given. Because without an invitation, no-one will come.

I know it’s so easy to leave it to somebody else. Don’t do that. Instead, grab an invitation. And invite!

Questions
Have you invited anyone to a Christmas event? Who have you invited to share Christmas with you? Are you looking out for the lonely and those struggling? Can you invite them to an event, or into your home?

One thought on “Invite!”